By now you’ve probably heard that Flickr has come out with a new App for iPhone. This was music to my ears when it was released last month since Flickr was my very first photographic community. Long neglected, the original app didn’t offer much beyond viewing your stream and those of your contacts, but you’ll be pleasantly surprised to discover all the capabilities of the new iPhone app. 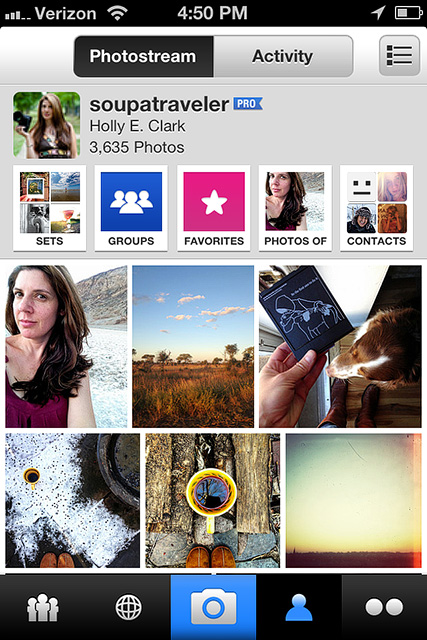 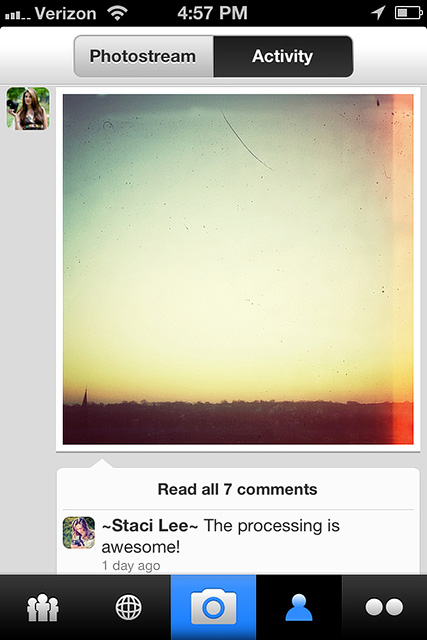 You can shoot with the in-app camera or use images from your camera roll, edit your image using a series of filters or fine tune your results even further using the built-in editor. If you’re not of a fan of using filters, no worries! Just turn them off in your settings, which you can access by clicking on the two circles in the bottom right corner of the app. To access the editor, just click on the little pencil which is in a square box in the top right corner of your photo. 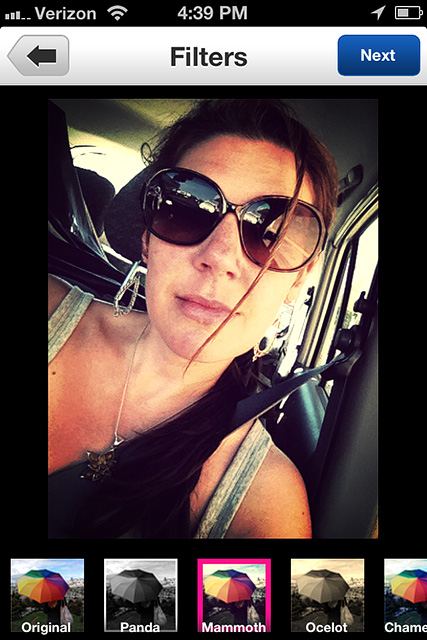 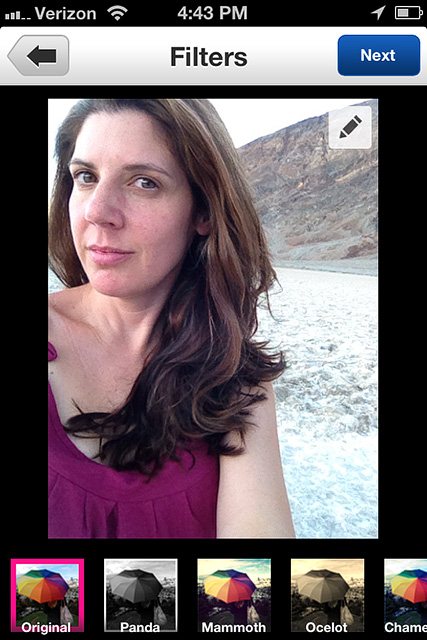 Once you’re in the Photo Editor, you can edit your photo using several different tools including enchance, contrast, sharpness and saturation among others. Its super easy. Just select the option you want and move the sliders in the direction you choose. There’s even a retouch section where you can edit out blemishes and whiten teeth. 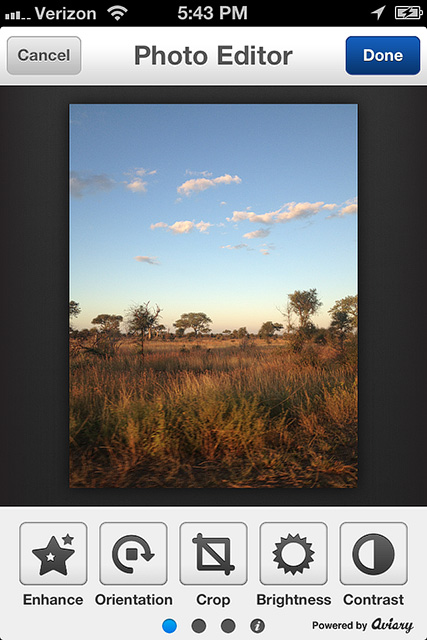 When you’re ready to share your photos, you can add as many details to them as you would if you were uploading directly to flickr through your computer from adding tags or people to adding it directly into sets and groups. When you upload your photo, you can also promote it across social media. As you can see here, I’ve added my shot to my twitter feed and my tumblr blog at the same time. If I want, I can set a venue or location and then choose different privacy settings to determine who can see where I’ve been. 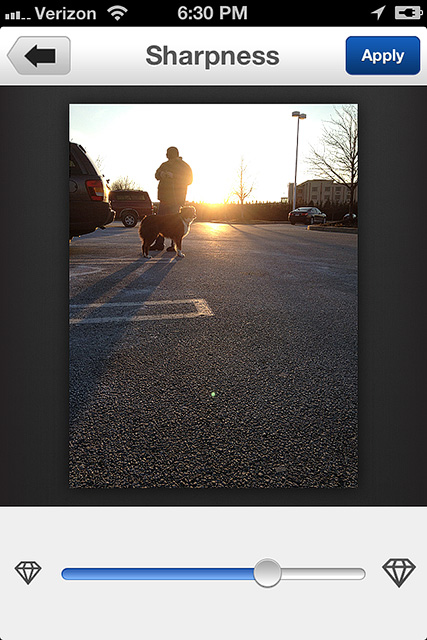 Once you’ve posted your pictures, your image information will look like the shots below. You can see the basic statistics for your shot like the date and time it was taken, what app was used to take the shot, how many views your image has received and what sets and groups it is in along with camera details as well. If you scroll done further, you can see how the image has been tagged, if any people have been tagged in the image as well as more information that includes exif data for the shot. If you’ve enabled your location information, a map will be displayed like the image on the left. 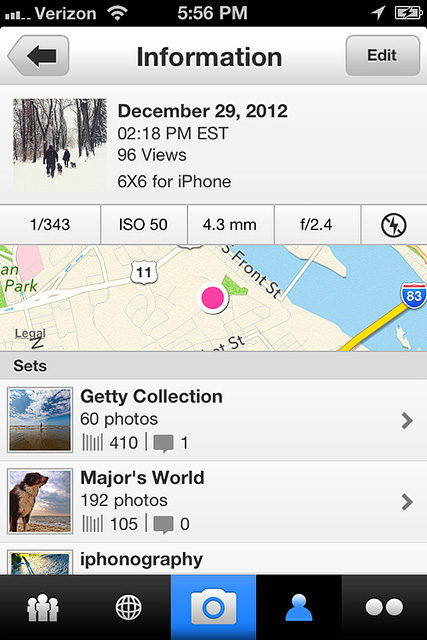 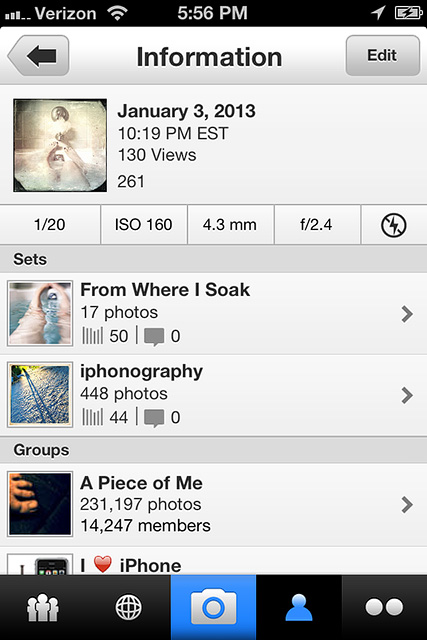 Of course, the Flickr App is not just for uploading your own photos and checking them out, it’s for viewing your contact’s photos too! You have two choices in which to view their work, as thumbnails or larger images by contact feed. Scroll through their work by sliding your finger over their work to the left and view their images horizontally. You can double tap an image to fav it or leave a comment if you like.

You can also add your images to groups, like the Mortal Muses ~ Mobile Monday group, using the app too. Don’t feel like scrolling through all your groups? That’s okay, you can search for your favorites in the top bar. To add an image to a group, click on the square with the plus sign (at right), and to share a photo from a group, click on the box with the arrow in the middle. 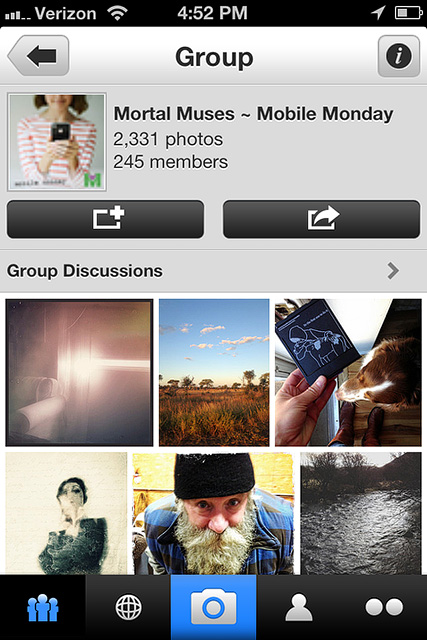 I hope you’ve liked what you see so far and give the Flickr for iPhone app a try. If you’d like to learn more about the app, check out this post from the flickr blog giving you the top ten tips for using the app.

Android and iPad users will be pleased to know that a Flickr app for them is currently in the works. According to Markus Spiering (head of the Flickr product at Yahoo) in a recent c|net article:

“We are planning shortly after the iPhone launch to bring the experience also on Android — a consistent experience that feels natural and native to the platform,” he said. “Going forward there should not be a difference between where you use Flickr,” he said, mentioning smartphones, tablets, and desktop computers.

Whether you’re a flickr veteren or new to the community, Flickr for iPhone won’t disappoint. You might even find yourself spending more time over there than you have in a long while. I know I have! Until next time! For now, I’ll see you on Flickr!