A few weeks ago, I sought inspiration at an exhibition at the National Gallery in London. The premise of the exhibition was simple: it illustrated how photographers have always drawn upon fine art traditions, such as Old Master painting, “to explore and justify the possibilities of their art”. It was the room containing the portraits that really grabbed my attention and before I knew it, I was scribbling notes about one particular photographer from the 19th century. I was vaguely familiar with her name, but I wanted to learn more about her.

Her name was Julia Margaret Cameron.

Cameron was unusual for many reasons: she was one of the first female photographers and she used her astute business sense and social networking skills to great effect. Born in 1815 into a well-known and wealthy family, she married Charles Hay Cameron, an official stationed in Ceylon who was twenty years her senior. They had six children (five sons and one daughter) and moved to London when her husband retired in 1848. During the early years of her marriage she enjoyed a busy social life and was particularly interested in poetry and literature, all of which was to help her later in her photographic career. Her friend Sir John Herschel, a famous astronomer, kept her up to date with the latest developments in photography, and at the tender age of 48 she was given a camera by her daughter. She quickly became obsessed with photography and within a year she had been elected a member of the Photographic Society in London.

Cameron and her husband visited the poet Alfred Lord Tennyson on the Isle of Wight, off England’s south coast, in 1860. Inspired by the location, they bought a property on the island in nearby Freshwater Bay, calling it Dimbola Lodge. Here, Cameron was able to focus on her photography, using the coal shed as her darkroom and the hen house as her studio. Tennyson was a charismatic figure with many influential friends. The artists, writers and intellectuals who visited him became known as the Freshwater Circle, and Cameron was the group’s unofficial photographer. Charles Darwin, Robert Browning and Henry W. Longfellow were among those she photographed and in some cases her images are the only photographic portraits of eminent historical figures. A canny businesswoman, she registered each of her photographs with the copyright office and kept meticulous records, which is one of the reasons so many of her photographs have survived. Here are her portraits of Tennyson and Darwin: 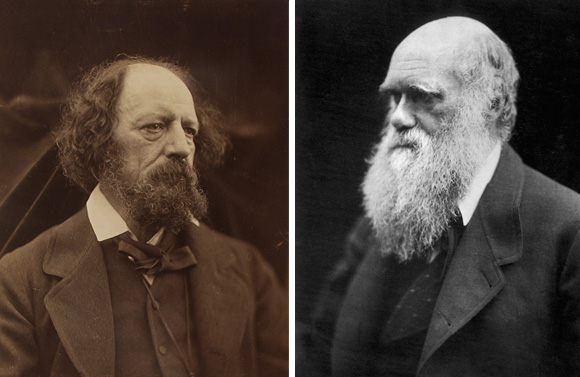 Using long exposures and soft focus, her images were often blurred, creating what she felt was a painterly effect. I loved reading that her children and others often tired of being endlessly photographed; I can only begin to imagine how difficult it must have been for them, as they had to sit still in the bright light, often for many hours, as Cameron handled each wet plate.

Many of her photographs feature her maid or her friends dressed in costumes, as with this little girl, and various patient relatives (including Virginia Woolf’s mother, Julia Prinsep Stephen, shown below). As her images became more fanciful, she posed groups of people in front of elaborate backdrops. Some of these photographic illustrations were eventually published with Tennyson’s poems. 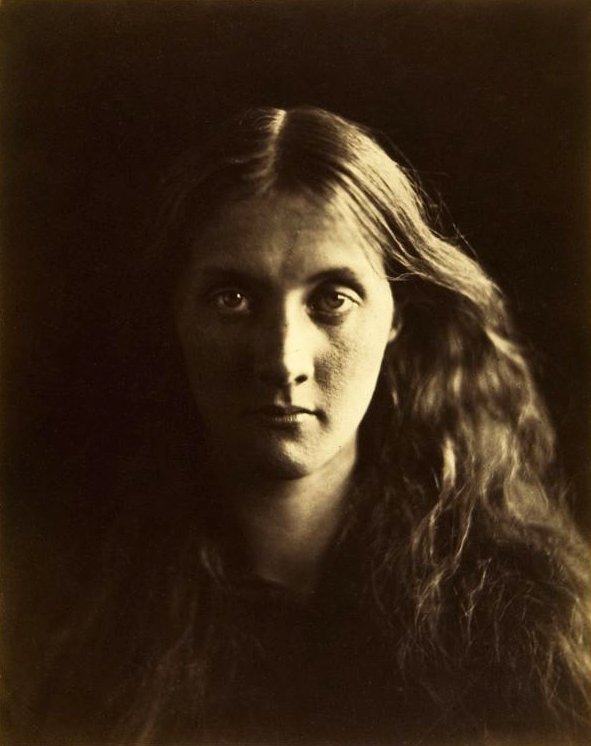 Cameron and her husband were renowned for their generous hospitality, but as the income from their plantations in Ceylon dwindled, it could no longer sustain their extravagant lifestyle. In 1875 they packed up all their belongings, including two matching coffins, and returned to Ceylon. She took a few posed images of local people, but without her social gatherings to inspire her, and with photographic chemicals hard to come by, her photographic output declined. She died in 1879 after catching a chill.

I find Cameron truly inspiring on several levels. Born before photography had even been invented, she had to learn how to do it at a time when it was a complex and messy process. It makes me realise how fortunate we are with our modern digital cameras. What is even more impressive is that she achieved such success in a male-dominated era. I find myself imagining how difficult it must have been to get her friends and family to sit for her as she tried to achieve a specific effect or perfect a particular image. Perhaps most impressive is that she achieved so much even though she only started using a camera at the age of 48. Just imagine what fun this creative, gregarious woman would have had with modern camera gear and social-networking sites!

If you ever find yourself feeling frustrated that  Polaroids can be a bit hit-and-miss and take half an hour to develop, or that you have to wait days for films to return from the processing lab, just think of Julia Margaret Cameron, and how much the world has changed. I’d love to hear who inspires you from the world of film photography or even before that time, like Julia Margaret Cameron. Please tell me in the comments; I’d love to see who’s been inspiring you.

all images sourced from wikimedia commons