Before and After: my iPhone processing tricks and tips

When I post iPhone images on Instagram and Facebook I am often asked which apps I used to process them. So here are four “before and after” examples that explain which apps I use most often, and how I got from the original iPhone image to the final result in each case. 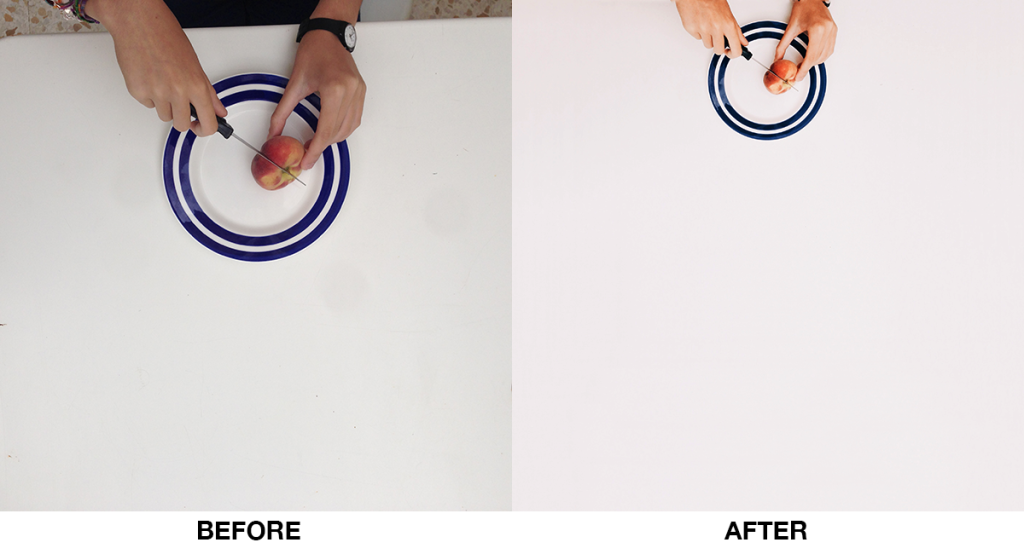 APPS USED: VSCOcam, Anticrop
With this image I wanted to use the idea of negative space, and the contrast between the white of the table and the colours of the peach and the plate. The table wasn’t all that big, but I had a plan! To begin with, I took the original image, and imported it into VSCOcam, which I use to process most of my images. My preferred filters are the A and E series, because they give me the dreamy film-like mood I get from my film cameras. Some of the VSCOcam filters are free with the app, and you have to download the others. I usually increase the contrast a little, apply a bit of sharpening and try different exposure settings. Once you’ve figured out how you like to use VSCOcam, it’s worth rearranging the order of the filters and the tools so that the ones you use most often are easily accessible. In this case I used filter A6, added some sharpening, increased the contrast to bring out the white of the table, and straightened the image. I then exported the image into Anticrop. As its name suggests, it does the opposite of cropping: it intelligently extends images by adding more around the edges. In this case extending the table was easy, because it’s a flat colour, but Anticrop can also extend cloudy skies and other more complex textures (though sometimes you need to try it a few times to get a convincing result). 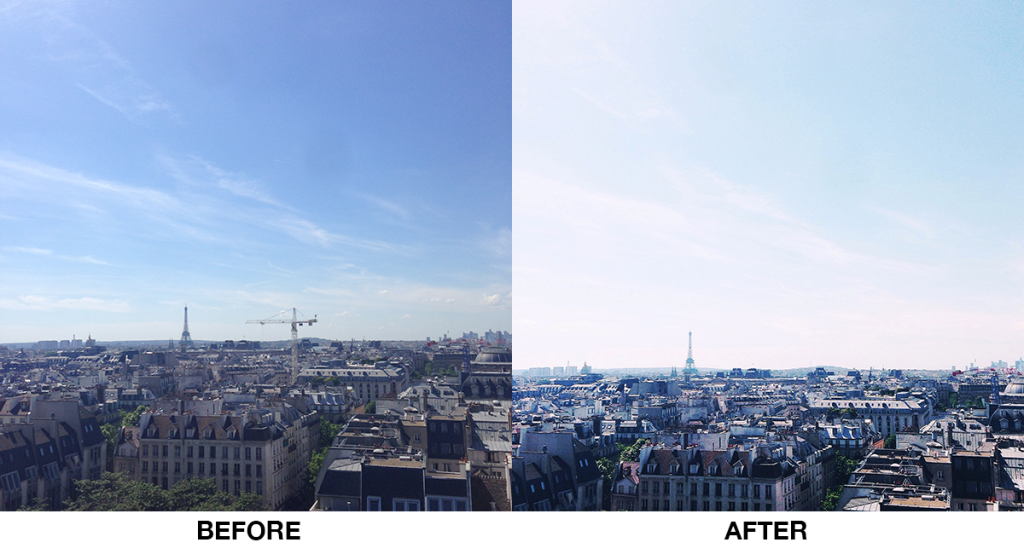 APPS USED: VSCOcam, TouchRetouch
I took this image of the Paris skyline from the top of the Pompidou Centre, where I had gone to see the Cartier-Bresson exhibition. But the horizon was unfortunately marred by a horrible crane. So after the initial colour correction in VSCOcam (this time I used A1, which I like because it replicates the feel of Portra 400 film), plus a bit of sharpening and fiddling with contrast and exposure as usual, I exported the image into the Retouch app. This app is great for removing extraneous features from an image. You simply swipe your finger over the offending item and the app does its best to paint it out. For best results, it’s often worth having a few goes at this, or going over the same spot several times. It’s also worth trying different brush sizes. In this case I used quite a large brush to paint out the crane in a single stroke. As you can see, the app has done a pretty good job of replacing it with building, roofs and so on. You’d never know the crane had been there! 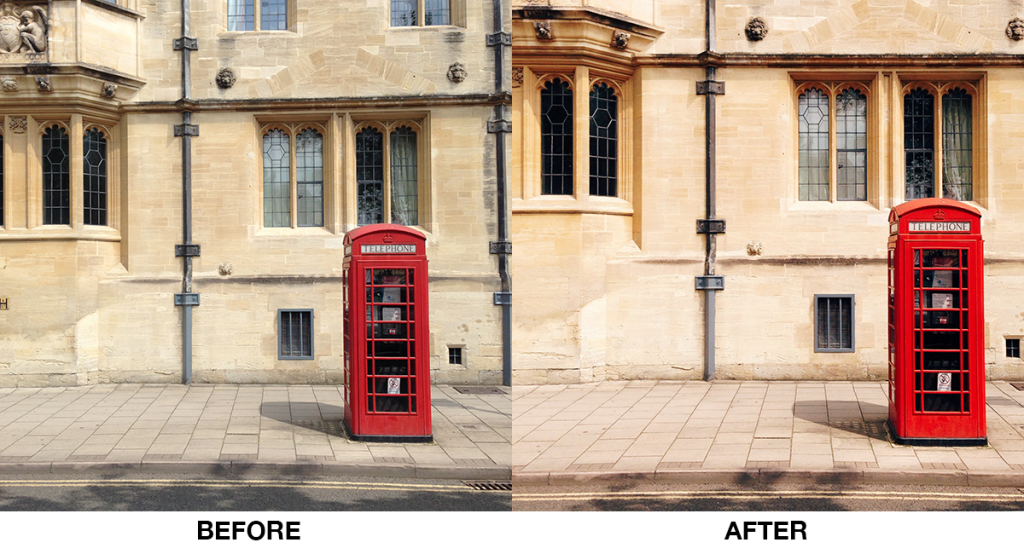 APPS USED: VSCOcam, SKRWT
On a trip to Oxford I saw this phone box and was struck by the colour contrast between the red paint and the yellow sandstone. Even though I tried to shoot as straight an image as possible, it was still a bit wonky. I wanted the drainpipe to be vertical and the windows to be neatly horizontal. Once again I did the colour correction using VSCOcam (filter E2, plus sharpening, a bit of extra contrast and a slight reduction in the exposure). Then I opened the image in SKRWT, an app that lets you stretch and warp an image in a variety of ways. I normally used it to correct for converging verticals, but it can also compensate for barrel distortion and other sorts of wonkiness. And it has a very fine grid for accurate straightening if you are obsessed with that sort of thing. It’s particularly useful if you are a stickler for symmetry, for example when taking pictures of doors and windows (#straightfacades). 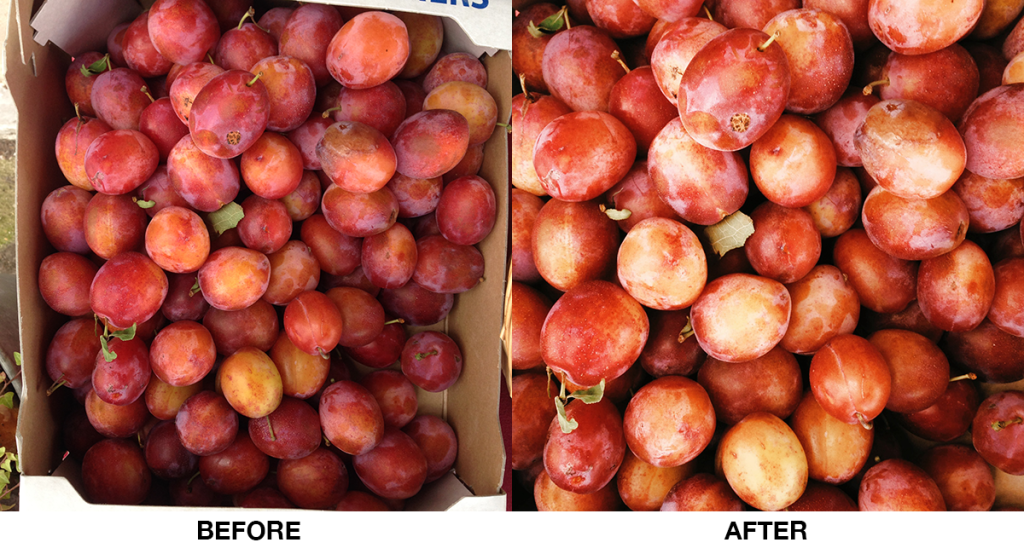 APPS USED: PicTapGo
For this image of plums I had to go back several times to the greengrocer before I got the shot I wanted, with the box filled (people kept buying the plums so the box wasn’t full!). With this sort of image, where you are filling the frame with a collection of similar items, I find it’s easier to shoot from further away and crop in afterwards. It means you get less distortion and also makes it more likely that everything will be in focus. This time I used my other favourite processing app, PicTapGo, which has recently been enhanced with the addition of film-like filters, called Replichrome Minis. I used the Ekt 25 filter, because I wanted the plums to glow, the way they would have on Ektar slide film. I also increased the contrast and exposure slightly.

New apps come and go all the time, and new features are always being added as well. And the new iPhones and iOS 8 are about to appear too, which will no doubt shake things up even more. But that’s what makes mobile photography so exciting — there’s always something new to try. And a new app costs much less than a new camera or a new lens!