I hope you have noticed our love of all things Polaroid here at the Mortal Muses. I was given my first Polaroid camera in the summer of 2011. But figuring out how to get the best from old Polaroid cameras (which have been gathering dust in attics for years) and new kinds of film (made by Impossible Project) is far from easy. After several false starts and much heartache, I feel I’m on track, with more than a little help from my friends Christy, Debra, Lindsey and Meghan. So this is the blog post I wish I could have read when I started out. It’s like a message to my former self, and I hope you will find it helpful if you are thinking of giving Polaroids a try. Here are the five tips I wish I had known at the start of my adventure with Polaroids!

1. There are three main sorts of Polaroid camera.
And they all use different kinds of film! There are Polaroid type 600 series, the Polaroid type SX-70 and the Image/Spectra cameras. The folding SX-70 type is a design classic—its elegant design inspired Steve Jobs—which means the cameras are now cult collectibles. The chunkier 600 series cameras are easier to get hold of and are a good place to start your Polaroid adventure. I have a 660 with autofocus. Yes, it may take up a fair amount of room in my bag, but it’s light and I get good results the majority of the time (see above). I have had a series of disasters while trying to buy a more elegant SX-70, and if you want to buy one I suggest you get one from a dealer who has serviced and checked it properly. This costs more than buying a camera on eBay, but you can be sure than it will work. I bought an SX-70 from a seller in the US, which meant paying extra postage and customs duty, but it was unreliable and I’m now having it serviced by a dealer in London. Given the high cost of film (around $4 US a shot) you really don’t want to be wasting it in a camera that’s not working properly. To further complicate things, each of these three types of camera uses a different kind of film, so check that you have the right sort of film for your camera before you hit the buy button. You need PX-680 film to go with a 600 series camera, PX-70 with an SX-70 and PZ-600 film for a Spectra camera. Just to confuse matters, you can also use PX-680 in an SX-70 camera, but only if it has been fitted with a neutral-density filter. So if you are starting out, go for a 600-series camera that has been properly tested and buy PX-680 film. And remember that you can get the equivalent black-and-white films for each of the cameras too!

2. Store the film in the fridge. Once you have bought your camera and film, remember that the film should be stored in the fridge before you use it. Impossible Project recommend letting it warm up for an hour before putting it in your camera.

3. Shield your film. Unlike original Polaroid film, the Impossible Project film needs to be kept in the dark for a few minutes after exposure. (Impossible Project have recently released their new colour-protection film which is not as fussy about being shielded as soon as it comes out of the camera—but it doesn’t hurt to be careful anyway.) After messing around with cardboard boxes and envelopes I eventually bought a frog tongue for my 660 (which clips into place and cleverly unrolls to shield images as they emerge from the camera) and the dark slide for my SX-70 (a fixed flap which does the same thing). After a few minutes I take a peek at the image, and after 10 minutes or so I transfer it to a box or an envelope where it can continue to develop in the dark. Failing that, put it in an inside pocket, or face down on a table. After about 30 minutes the image will have finished developing. And remember the film tends to work better between 15-25 degrees Celsius (55-77 degrees Fahrenheit) so in the winter months the colder film will tend to underdevelop. Impossible sells a cold clip  but the easiest solution is to use your body heat to warm up the freshly ejected image after exposure by tucking it into your armpit for a bit.

4. Think about your exposure.  If you have an SX-70 you will need to reduce the exposure time by dialling darker on the exposure wheel, otherwise the image will be overexposed. You don’t need to do this with the 600-series cameras, but you may need to experiment with the exposure to get the best results: move the slider towards the dark arrow if you want your image darker and towards the light arrow if you want your image to be lighter. (This means that in bright light you move the image towards the dark arrow, and in the dark you move it towards the light arrow, which can be confusing.) I’m still learning how to manage the exposures of my images as I get to know my camera better, so keep experimenting with yours until you get a feel for it. Also, I find that Polaroid images are better if they are lit from the front (sun behind you). Backlighting is not your friend when it comes to Polaroids.

5. Storing your Polaroids. You get just eight shots per pack of film. Some of your first pack will be total triumphs and some will not. Remember to store the exposed images away from light. I store mine in a shoebox, with ribbon around each set of images. When we go on holiday I like to lay them out to make a gradually expanding collage, which I then shoot with a digital camera. If you have a scanner you’ll want to scan your favourite Polaroids, both to share online in the short term and to preserve them for the long term.

If you’re thinking of giving Polaroids a try, I hope this post will help and inspire you, and that you will soon be as addicted as we are! In an age of digital perfection, there’s something peculiarly satisfying about getting a really great exposure from a mechanical, chemical system. You can see how much fun I had with my Polaroids in Crete, just this past week. (These were shot with my 660, with a mixture of original and colour-protection PX-680 film.) 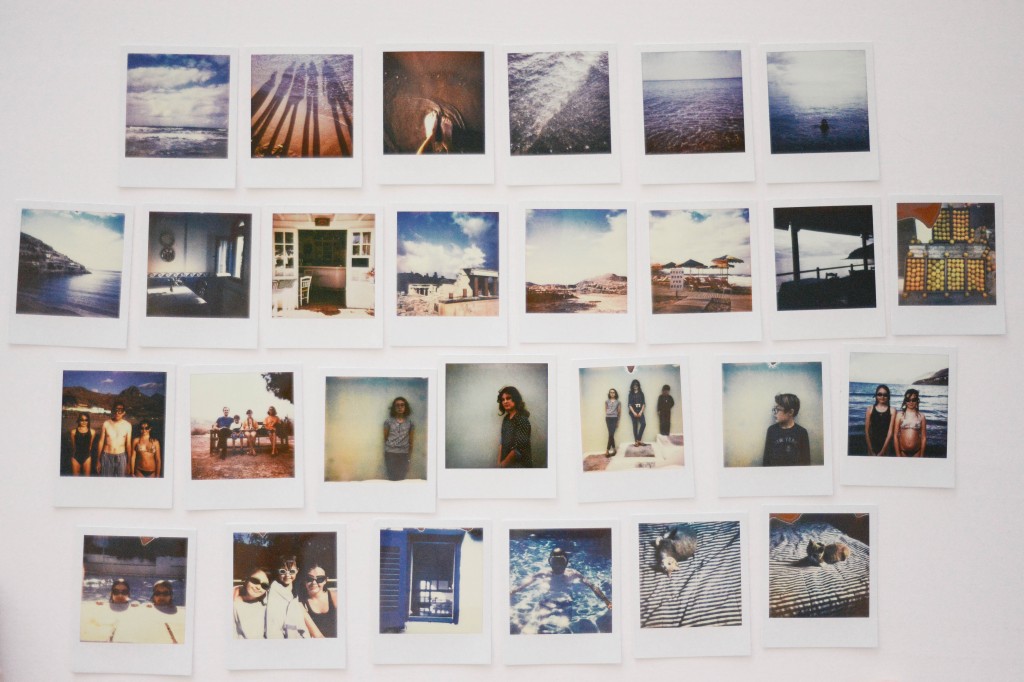 There are no related projects right now.