I had a conversation on Twitter with a friend last week as she was making a packing list for her vacation to Cuba. She was musing on bringing her 35mm film camera. As the chance to shoot film in Havana – with all the crumbling architecture and classic cars – sounds like a dream come true to me. I asked if it was the only camera she was planning to bring. She balked. I understand, of course. I have been known to bring four or five cameras on vacation with me.  I think that those of us who are omni-shooters (like omnivores, but with cameras!) can have a pre-trip anxiety attack as we imagine a scenario where a perfectly photogenic moment happens on vacation and the camera that would be perfect to translate it is sitting at home. I also think that this is compounded for film shooters. For the most part, I love the photos that come out of my Polaroid cameras more than any of the rest of my photographic work. However the Polaroids have their limitations, particularly when it comes to low light conditions.

So what to do when the stakes are high, like a once in a blue moon (or even once in a lifetime) trip?

I faced the how many/which cameras dilemma as I was planning for my trip to Mexico earlier this year. I thought about it and came to the conclusion that I wanted to travel light. I decided to leave my DSLR at home and bring my Polaroid 680SLR, SX-70 and my iPhone. In the days leading up to my departure I agonized some over the photos that I wouldn’t be able to get without my DSLR but I convinced myself that my iPhone would be an acceptable stand-in. Of course, as fate would have it my first shot with the SX-70 resulted in a stuck mirror that rendered that camera (and half of my film stash) useless for the week. To add insult to injury I fried my iPhone on day 2 of the trip. There I was in a place I called “peeling paint paradise” with only 36 instant film frames to capture it all. 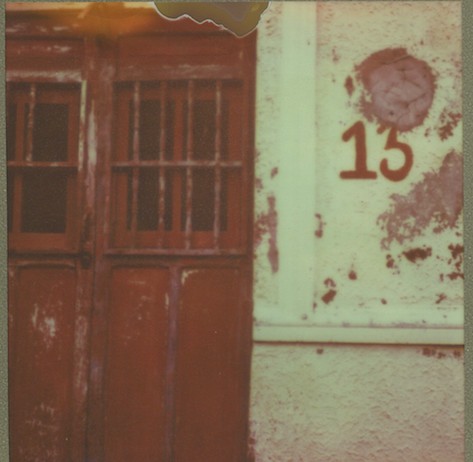 I came across this article by photojournalist Vincent Laforet where he talks about his shooting experience after being challenged to trade his Canon 1Dx for a Canon A2E and 2 rolls of film. Having not shot film in nearly 15 years, Laforet writes about those awkward first moments shooting film, like reflexively checking an LCD screen that doesn’t exist. But then he settles into the challenge, much as I did in Mexico.

He starts to rely on his photographer’s instincts to find what would make a good photo – interesting light, interesting geography, a passing bird. Without the immediate feedback of digital, he finds himself having to work harder for the shot. With a finite number of frames he finds himself being more disciplined about pushing the shutter.

I can very much relate. Faced with a seemingly limitless number of photogenic subjects but a severely limited number of photographs I could take, I focused on selecting my pictures before I even took my camera out of my bag. With so few exposures I found myself making a shot list in my head. There were iconic scenes that I really wanted to capture and others that I knew would translate well onto my instant film.

In the end, I’m proud of the pictures I brought home and grateful in some ways to have had to be so deliberate with my photography.

As for my friend, last I heard she and her husband, both professional photographers packed a camera kit including the film camera, 2 digital bodies, a high-end point and shoot and two iPhones. I don’t blame them. It’s hard to resist the call of the potential perfect shot/perfect camera combo.