My search for concise advice

This week I came across my father’s old film camera, a Canon AE-1, which I used for a while in the 1990s and have occasionally used since. Whenever I use it, it reminds me of my dad, who died in 1991. The old Canon has a slot on the back where you can insert the lid of a cardboard film packet, to remind you what film is loaded in it. But about 20 years ago I inserted a piece of card on which I wrote some advice to myself. It says: 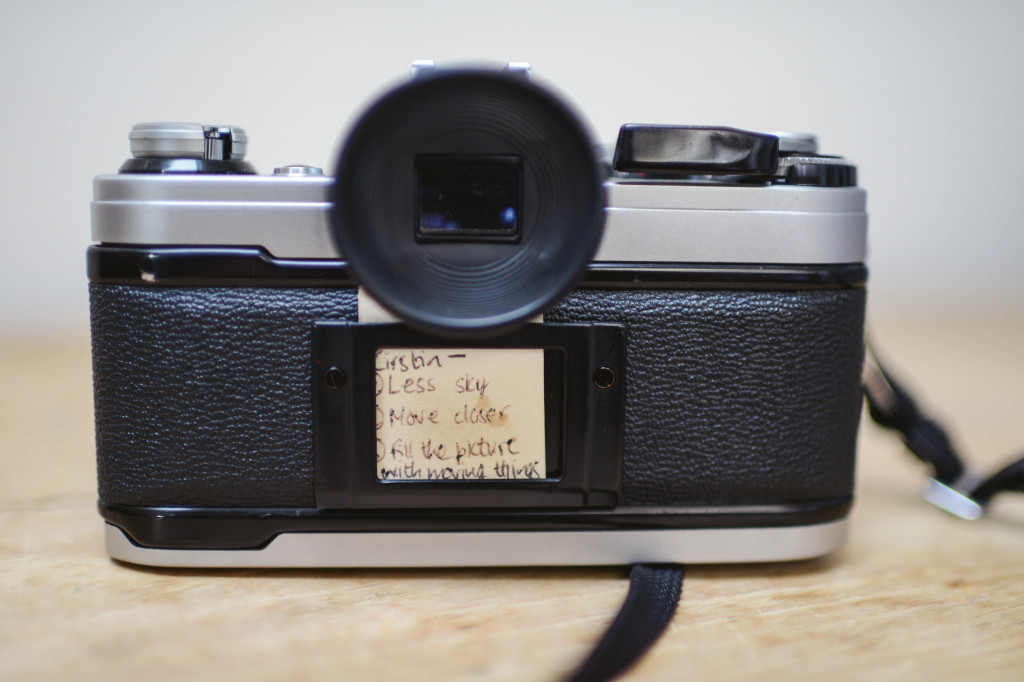 The camera used to have a 35-70mm lens on it (I’ve since replaced it with a 50mm) and evidently I used to keep it at the 35mm setting and take lots of pictures with too much sky and tiny people in the middle of the frame. So I was trying to remind myself to move closer and fill the frame more.

Two decades on, it’s amusing to see this message I wrote to myself, a critique of my photography at the time. So much has changed — I now have digital cameras and prime lenses, for one thing. But some things have not. I still love photography and still want to get better. So I’ve been wondering: if I was going to update this piece of card with some new advice, some different photography tips, what would they be? I decided to ask some other photographers to tell me the best advice they had ever received or would like to. Here are their answers.

Learn how to market and promote yourself.  There are millions of people trying to be photographers today, which means the odds of making it are similar to that of an actor in Hollywood.  Getting discovered is the key and thinking your work will just speak for itself just doesn’t cut it anymore. Adopt a multi platform approach, publish work to Instagram, Tumblr, 500px etc. Keep your style and subject matter consistent. Be ruthless when it comes to the edit. You will always be judged by your worst photograph. Once you get discovered, and if your work is good enough, the commissions (payment) will follow.

Jonathan Canlas
photographer, tutor and author, “Film is Not Dead”

The best advice I was ever given about photography was to unplug. To stop looking at what everyone else was doing and focus on what I wanted to do. Stop looking at blogs of people in your same field. It will do you wonders in allowing you to expand your own personal voice/vision.

(Incidentally, during 2014 Jonathan is running the last of his FIND courses outside of his home in Hawaii, so book now if you want to learn about film and meet like-minded peeps.)

Compose the picture until it is perfect, then move the camera back a yard!

Two things: my grandfather taught me to take notes on each frame (film, ISO speed, aperture, shutter). You learn a lot from that as to how a film performs in different light. Second, “learn to see light”. That’s really all it’s about from inspiration to effectiveness.

Keep shooting! Can’t remember who said that — probably everyone — but it’s crucial. Also, I never forget my Dad commenting on an image I took of a family friend with what was probably my first camera when I was 10 years old or so. She was sitting across the table from me but with her head turned to my right. I placed her in the last third of the frame so that she was looking towards the right edge of the image with lots of empty air behind her head to the left. My Dad said that it would have been much more interesting if the viewer could see more of what she was looking at and not just the room behind her. Even though I very rarely shoot people, I think about this from time to time; I guess we can call it a lesson in deliberate composition?

Meghan Davidson
fellow muse
I was told that most of the time, we have to take a lot of photos to have one or two that we really love or that are really strong. Some famous photographer from decades past (not sure who) was supposed to have said that in one full roll of 24 frames, she/he would be happy to have one or two images they really liked and believed were strong.

So, look at as wide a range of other photography as possible, step back, take notes, learn to see light, keep shooting! I realised that I have been trying to condense my entire approach to photography onto a tiny piece of card. Having thought it over, I decided that I could distill it all into one word: “focus”. This works on many levels: it refers to the process of focusing, obviously, but also on the need to be mindful of the situation. More broadly it alludes to the idea of deciding what I want from an image before I even look through the viewfinder and, beyond that, my commitment to work at my photography so that I get better at it. So, “focus” it is!

What’s your favourite piece of photographic advice? Will it fit on a tiny piece of card on the back of a camera? Let me know in the comments!