Five years ago I came across a blog called The Art of Non-Conformity. What pulled me in was my passion for travel of course. The author was on an ambitious quest to travel to every country in the world before the age of 35. He also talked about pursuing personal passions while striving to make the world a better place. Since then Chris Guillebeau has not only completed his goal to travel to all 193 countries, but he’s also published three books, his second becoming a New York Times and Wall Street Journal bestseller with more than 300,000 copies sold world wide!

Earlier this month, I headed down to my old stomping ground in Old City Philadelphia to hear Chris discuss his latest book, The Happiness of Pursuit, which debuted on the New York Times bestseller list at #3 this past weekend. His talk was followed by a brief Q&A with readers at Indy Hall where he answered questions about the book, his travels and his life.

As you know, photographers love taking on challenges, and we’ve featured several photo-inspired projects over the years that sounds awfully familiar to what Chris explores in The Happiness of Pursuit – that the pursuit of quests can bring purpose and meaning to our lives – and I’ve sprinkled a few of these throughout Chris’s interview below. 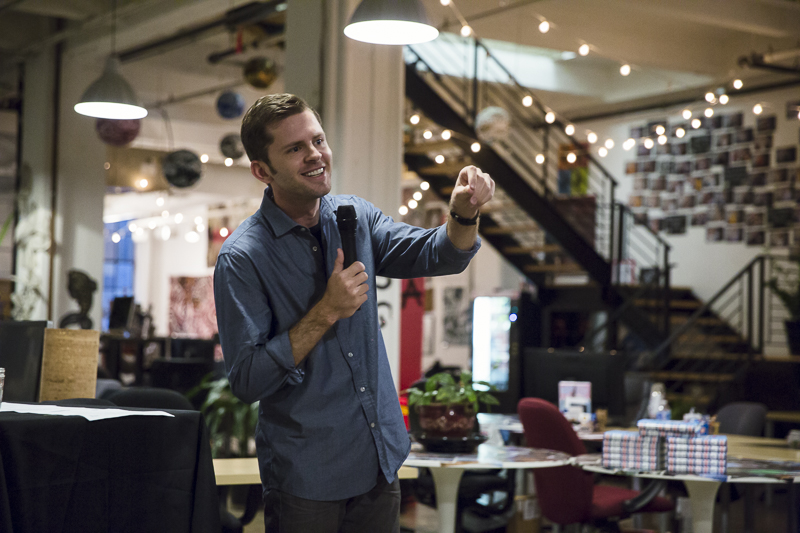 Tell us a little about your new book, The Happiness of Pursuit.

The new book is my most personal one. It’s essentially the story of quests, including my own and many others, along with a prescriptive message: pursuing a quest or embracing a life of adventure can bring purpose and meaning to your life, no matter who you are. There’s a journey waiting for you, even if you don’t want to travel.

When I was in high school I wrote out a bucket list, a list of things to do before I die. While everyone else was planning for college and picking out their career paths I was busy worrying about death and how to live life to the fullest…After graduation I tried to adopt a more “grown up” way of doing things so I put my bucket list aside. For two years I accomplished almost nothing. So on September 16, 2013 I dug out my bucket list and I decided to start living life on my terms. Since then I have crossed seventeen things off my list and I have started chasing my lifelong dream of being a pilot. I’ve also had a thousand unexpected little adventures along the way. I’ve conquered fears, I’ve faced challenges, I’ve had dreams come true and best of all I have been enjoying my life instead of letting it pass me by.
– Muse Jenny Wall, Chasing Dreams 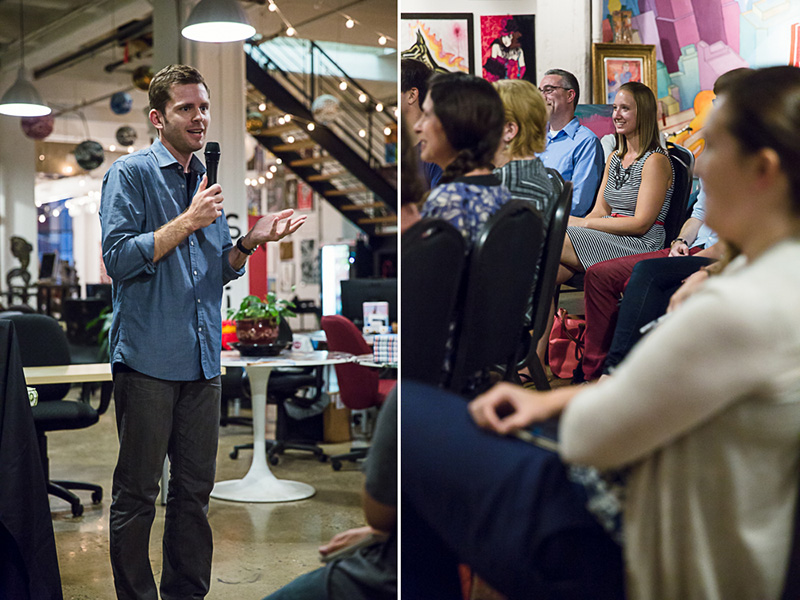 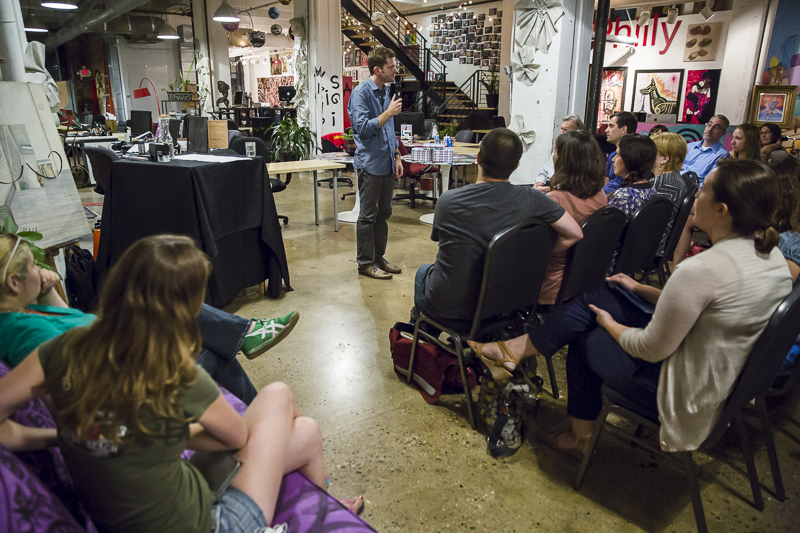 You started your journey to travel to every country in the world before you’d defined it as your personal quest. Had you been documenting your travels through writing from the start? When did both (writing & the quest) turn into something bigger?

No, the writing and documenting came later—a bit less than halfway through. At first I was just a traveler, not really pursuing something specific or with such well-defined parameters as “every country in the world by age 35.” Once it turned into a full-fledged quest, I started a blog and invited people to join in along the way.

That’s when it turned into something bigger, and not just bigger: it changed the whole trajectory of the project. All of a sudden there were people all over the world who followed the journey and began to care about the outcome. 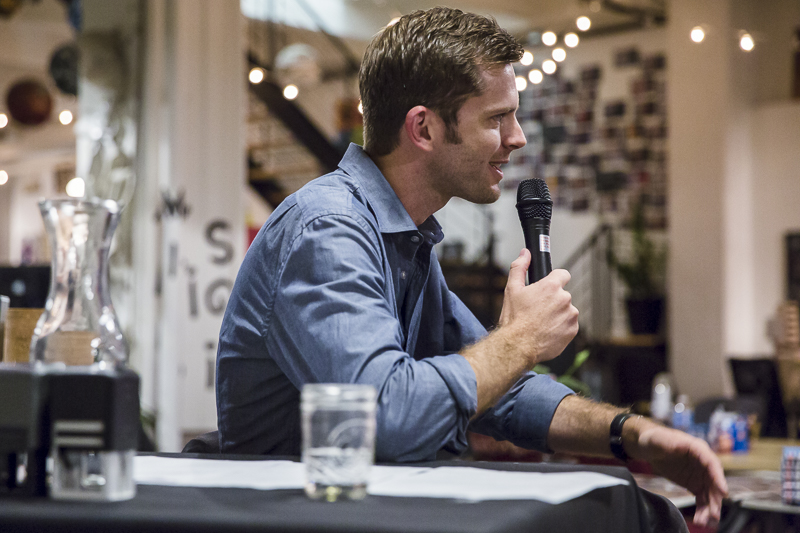 Photographers are no strangers to taking on long-term photo projects, a 365 for example (shooting and sharing a photo a day for a year). How does a “project” differ from a “quest?”

Great question. Let’s start with the word “hobby” instead of “project.” A hobby is something you like to do. You like to take photos, you like to play golf, whatever. A passion is something a bit deeper. You spend more and more time learning about your hobby. You strive to improve. You undertake various projects, such as the 365 that you mentioned. A quest is the logical extension of a hobby that turns into a passion. A quest is something that involves long-term challenge with incremental steps along the way. There’s a destination! But there’s also a long journey to get there, which is the best part. And once you go down the road of adventure, you don’t always know where you’ll end up.

I was feeling stuck in a rut with my photography work. I was taking out my camera like I was supposed to but it felt like I was just going through the motions…There was no direction and it didn’t feel like I was pushing myself anymore. I’m the type of person that needs a goal to work toward and sometimes, even more importantly, a deadline…I thought about doing another 365 project since daily photo practice had worked well for me creatively in the past, but the element of learning something new or stepping out of my comfort zone was missing. Then the idea for the Jar of Inspiration project began to take shape. – Guest Muse Angie Dornier 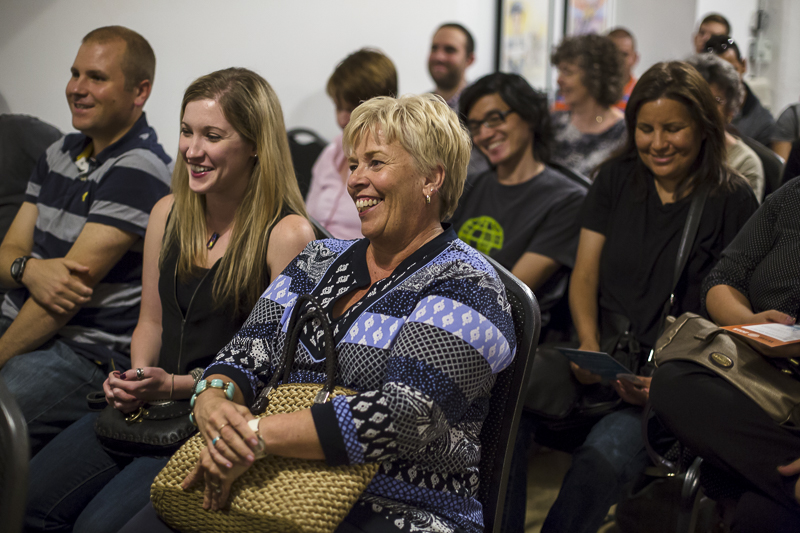 What did you find most challenging/rewarding about your quest?

I found the middle part—what I called “the slog”—to be the most challenging. The beginning of something is new and exciting. The end is also exciting, although it can be bittersweet and filled with complex emotions as you wind down something that’s been a major focus on your life. But the middle, where you’re just kind of trucking along with no end in sight, can be tough. As for what’s rewarding, that’s a long list. I saw the whole world! I went to every country! And throughout the journey, I experienced a lot of personal growth. I gained confidence. I gained self-worth. I gained a deeper appreciation for others. And as mentioned, a lot of other people began to follow along and care. That was incredibly rewarding.

I’m fortunate to connect with a fantastic community of remarkable people who are all doing interesting things. Every day I hear their stories and think, wow! These people are doing far more courageous things than me. 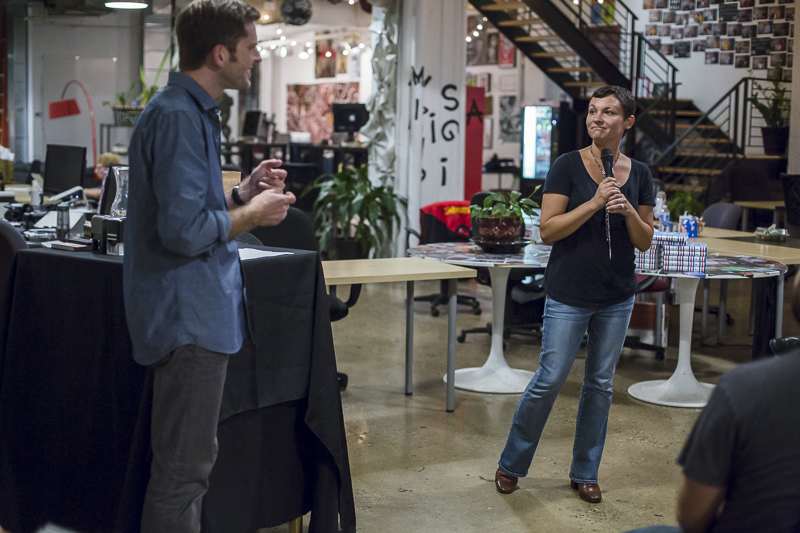 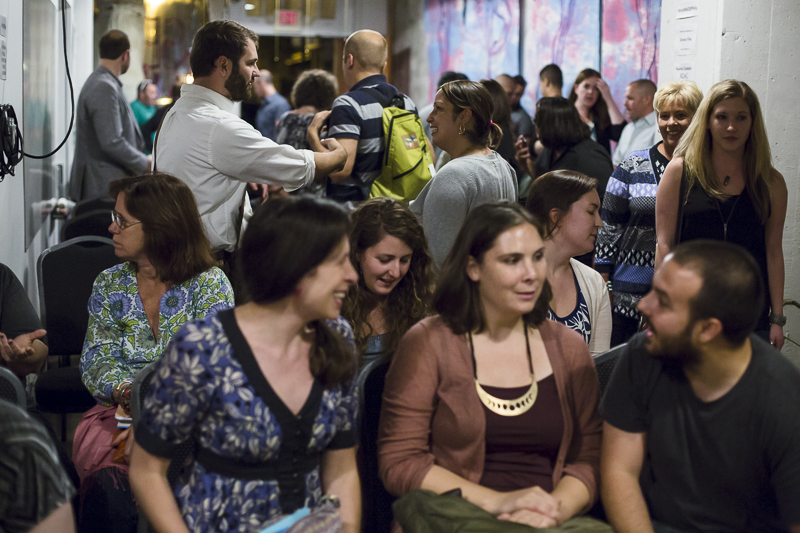 You seem to constantly push yourself within your craft. How has completing your quest made you a better writer? What advice can you give to others artists embarking on their own quest?

Challenge is the essence of any good quest. Striving is a key value of creativity. We want to be challenged! In my case, it wasn’t just completing the quest that made me a better writer, it was pursuing the quest. As for advice, well, I don’t usually like to give unsolicited advice. But if pressed, I’d say that it’s okay to experiment and try new things. It’s also okay to give up if something isn’t working. Often, giving up on something can lead us to something bigger and better. But if we stick with it even though we hate it, we’ll never find that other thing.

So I think the big challenge in life is to know when to quit and when to keep going. I’ve found answers to that by focusing on a) motivations (what do I most care about?) and b) impact (how does this thing help or benefit others?).

My journey came with the feeling of a complete loss of control and a lot of questions–is there an end in sight? why is this happening to us? I cried many tears but through it all never let go of the dream. And along the way I learned a LOT. About myself, my marriage, my inner strength, and my ability to cope with life’s challenges. And most importantly I learned to never give up, even when the dream changes.
– Muse Christy Gibney, Don’t Be Afraid if the Dream Changes 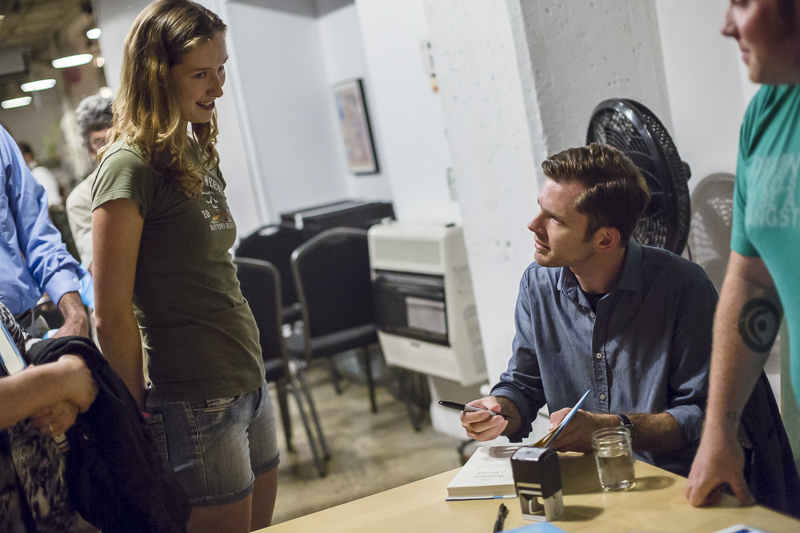 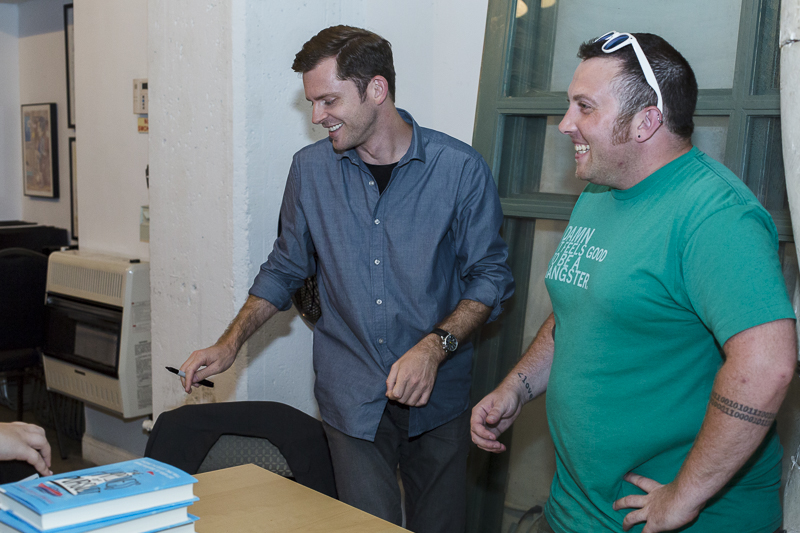 I plan to keep writing, traveling, and meeting with interesting people for as long as I can. Every year we produce an annual gathering, the World Domination Summit, that now draws thousands of people. I spend a lot of time on that.

I’ve attended WDS twice and was utterly inspired both times. The speakers that Chris and his team brought in were incredibly diverse, yet each spoke to living life in fuller and more engaged ways. As someone on a creative journey and who is seeking ways to live more authentically, deeply, and connected to self and others, WDS provided so much food for thought.
– Muse Meghan Davidson

At the moment, though, I’m fully focused on touring 40+ cities for the new book. It’s been a great experience thus far and I hope to see some of your readers along the way! 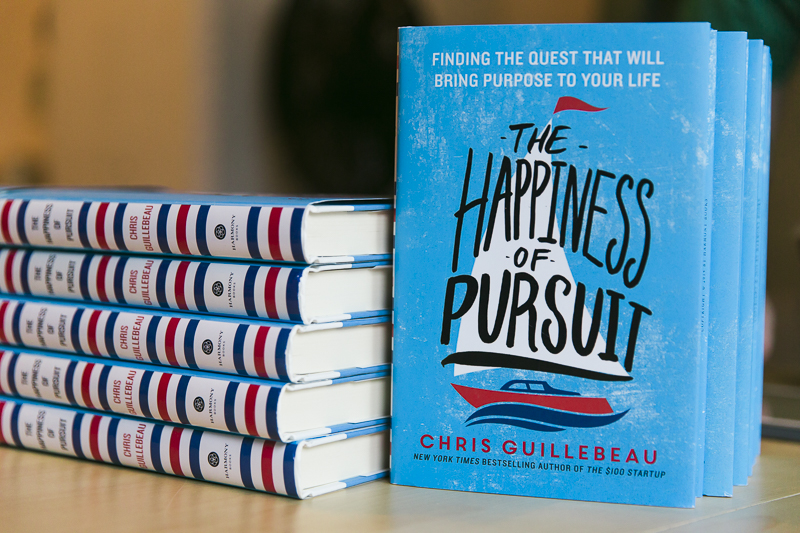 As with his other books, The Happiness of Pursuit is as much about Chris’s personal experiences and what he’s learned from them as it is about the remarkable people featured throughout them. He breaks his ideas into concepts and then provides his readers with inspired action points they can apply to their own lives if they so desire. I’ve yet to finish one of Chris’s books and not feel incredibly encouraged, and I always appreciate that he is willing to talk about not just the upside but the downside to every journey. In an internet filled with self-help gurus gushing about how amazing every aspect of life should be, Chris’s insight and logical approach to achieving a more fulfilling life feels refreshing and possible. It’s had me looking at my own photo quests and helped explain why some continue to nurture me while others have fizzled out yet still been fulfilling at the same time. Who knows, after reading The Happiness of Pursuit, you might find yourself defining or redefining your own personal quests too.

Until next time!
Holly ~ Soupatraveler